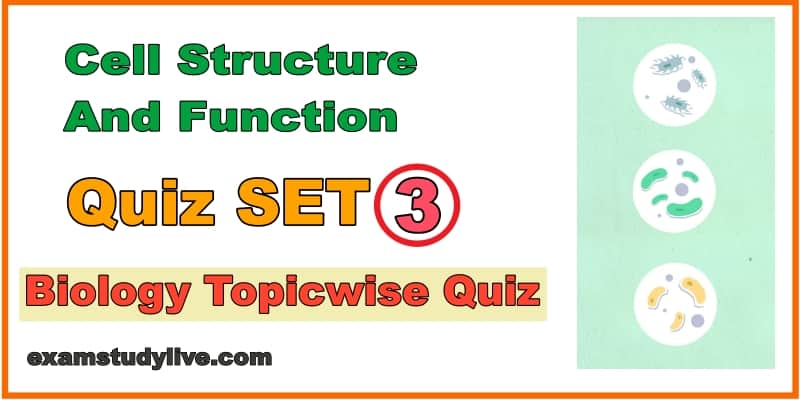 
Next Test (First in Female)

Quiz On Cell Structure And Function

1. A major site for synthesis of lipids is

2. Select the correct statements from the following
regarding cell membrane.

3. Which one of the following cellular parts is correctly
described?

(a) Thylakoids – flattened membranous sacs forming the grana
of chloroplasts

4. Select the wrong statement from the following.

(b) Both chloroplasts and mitochondria contain DNA

(c) The chloroplasts are generally much larger than
mitochondria

5. Which of the following statements regarding cilia is
not correct?

(d) Microtubules of cilia are composed of Tubulin

Ans: (b) The organized beating of cilia is
controlled by fluxed of Ca2+ across the membrane

6. A major breakthrough in the studies of cells came with
the development of electron microscope. This is because

(a) The electron microscope is more powerful than the light
microscope as it uses a beam of electrons which has wavelength much longer than
that of photons.

Ans: (b) The resolving power of the electron
microscope is much higher than that of the light microscope

7. According to widely accepted “fluid mosaic model” cell
membranes are semi-fluid, where lipids and integral proteins can diffuse
randomly. In recent years, this model has been modified in several respects. In
this regard, which of the following statements is correct?

(a) Proteins in cell membranes can travel within the lipids
bilayer

(c) Proteins can remain confined within certain domains of
the menbrane

(d) Many proteins remain completely embedded within the
lipid bilayer

Ans: (b) Proteins can also undergo flip-flop
movements in the lipid bilayer

8. Centromere is required for

(a) Movement of chromosomes towards poles

Ans: (a) Movement of chromosomes towards poles

9. In chloroplast, chlorophyll is present in the

10. Proteinaceous pigment which controls the activities
concerned with light is

11. When water moves through a semipermeable membrane
then which of the following pressure develops?

12. Which of the following ribosomes are engaged in
protein synthesis in animal cell?

(a) Ribosomes which occur on nuclear membrane and E.R

(b) Ribosomes of only Cytosol

(d) Ribosomes of only Mitochondria and Cytosol

Ans: (a) Ribosomes which occur on nuclear
membrane and E.R

13. Function of telomeres in nucleus is

(b) To Initiate the RNA synthesis

(c) To Seal the ends of Chromosome

Ans: (c) To Seal the ends of Chromosome

14. Which cell organelle is concerned with glycosylation
of protein?

15. Which of the following organelles has single
membrane?

16. Which of the following structures will not be common
to mitotic cell of a higher plant?

(a) In the cytoplasm as well as endoplasmic reticulum

(b) Only on ribose attached to nucleon

(c) Only in the cytoplasm

(d) In the nucleolus as well as in the cytoplasm

Ans: (d) In the nucleolus as well as in the
cytoplasm

19. Which of the following organelles contains enzymes
that have digestive actin?

20. In mitochondria, Cristae act as sites for

(b) Phosphorylation of Flavoproteins

21. Which one of the following organelles is located near
the nucleus and contains a collection of flattened membrane bound cisternae?

22. The inner membrane of the mitochondria is usually,
highly convoluted forming a series of infolding known as

23. Besides giving out secretory vesicles, the Golgiapparatus
is also concerned with the formation of

(d) None of these

25. Experiments of Acetabularia by Hammerling proved the
role of

(a) Cytoplasm in controlling differentiation

(b) Nucleus in Heredity

Ans: (b) Nucleus in Heredity

26. An outer covering membrane is absent over

27. All plastids have similar structure because they can

(a) Store starch, lipids and proteins

(b) Get transformed from one type of another

(d) Be present together

Ans: (b) Get transformed from one type of
another

29. Electron microscope has a high resolution power. This
is due to

30. Addition of new cell wall particles amongst the
existing one is

31. Resolution power is the ability to

32. Nucleoproteins are synthesised in

34. Microtubules do not occur in

35. Ribosomes are granules formed of

36 . Which one is present nearest to plasma membrane

37. Welded areas between adjacent cells are

39. Which is common in plant and animal cells

40. Which is not a function of vacuole in plant cell?

41. Arrangement of microtubules is

42. Lysosomes are produced by

43. Which does not occur in cell membrane

(d) None of these

(b) Is membrane bound, contains water and excretory
substances

Ans: (b) Is membrane bound, contains water and
excretory substances

46. What is true of membrane lipids and proteins?

(a) None can flip-flop

(b) Both can flip-flop

47. Middle lamella is mainly composed of

48. Who first saw and described a live cell

(a) Proteins Embedded in a phospholipid bilayer

(b) Protein embedded in a polymer of glucose molecule

Ans: (a) Proteins Embedded in a phospholipid
bilayer

50. Animal cells do not possess