What Is An Electric Field

Definition: Electric field is a region of the space around a charge or system of other charges if another charge is brought in to experience a force. It should be noted that the presence of an electric field around a system of charges even if when there is no charge to realize its effect.

The electric field acts as an intermediary to generate force between two charges and its introduction is indispensable for understanding the interactions between charged bodies. In addition, the area in which the electric field is located has changed or get modified. 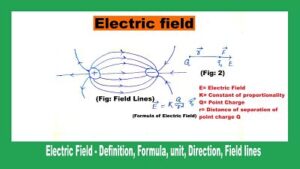 The direction of Electric Field

So the electric field located at the point close to the positive charge is directed away from it, whereas it directed towards the negative charge.

Where the letters E, F, and Q represent the following concepts

The electric field strength at a point due to the adjustment of the charge or charges is defined as the force exerted by a unit of positive test charge placed at that particular point.

Mathematically, It can be written as

What is a test charge?

It is a positive charge of such a small magnitude. And  it’s presence at a point does not disturb the electric field of that point)

Its unit in SI is Newton per Coulomb and in esu(Electro Static Unit) is dyne per stat Coulomb.

The concept of the electric field is used to explain how a charge, or group of charges, affects the field around it. The electric field “E” is similar to “g” which is called acceleration due to gravity but is actually a gravitational field. Learned all about gravity, and how the masses reacts to gravitational forces helps to understand how electric charges react to electric forces.

If the electric field at a particular point is known, then the net force experienced by charge “q” at that location is as follows:

E= Electric field of that point

If “q” is positive, the force and field will be in one direction.

If “q” is negative, the force will be in the opposite direction of the field.

The elementary unit of the electric field is in the International System of Units (SI) it is Newton per Coulomb (N / C).

It is also expressed by the unit of a volt per meter (V / m).

What Is Static Electric Field

The Electric Field is dimensionally represented as [M1 L1 I-1 T-3].

Energy In The Electric Field

To graphically represent the electric field, Michael Faraday (1791-1867) proposed a representation by means of lines called electric field lines or lines of force.

When drawing these lines you must take into account the following: